Earlier this month, 17-year-old Sam Berns, who many knew as a spirited and gutsy kid who was full of life, passed away from complications of a premature, rare and accelerated aging disease called Progeria.


Some may remember Sam from an HBO documentary he was featured in called "Life According to Sam," which documented his life living with the disease.  He also spoke at a conference in October 2013 sharing personal stories and experiences all while inspiring and encouraging others to live life to the fullest.


Sam proved that despite life’s obstacles, if there was something he wanted to do or be, he was going to do it and not let the disease be his limitation.


Sam was 1 per 8 million of live births that lead to this extremely rare genetic disease also known as Hutchinson-Gilford Progeria Syndrome. Symptoms  of progeria resemble aspects of aging, which start very early in life and can include wrinkled skin, fragile bodies, small faces with larger heads, recessed jaws and pinched noses, limited growth and full-body hair loss. Children with progeria typically live to their mid-teens to early twenties.


While children with progeria have normal mental and motor development, it’s some of their physical and internal challenges that make it difficult managing with the disease. 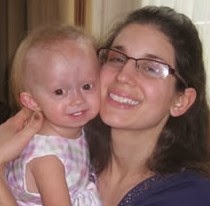 Recently, I spoke with a mom of a child with progeria, Laura Penny, who knows all too well what it’s like experiencing the challenges of raising a child with this life-threatening disease.


Laura experienced a healthy pregnancy with her daughter and did not exhibit any issues until her 38-week ultrasound when doctors saw the amniotic sac wall coming apart and was forced to deliver baby Zoey right away.

It wasn’t until Zoey’s eight week check-up that abnormal symptoms were concerning for both the doctors and her parents. After numerous tests over the course of several months and visits with specialists and geneticists the diagnosis of progeria was given.


For progeria, there are no approved treatments to cure the disease or even to slow it down.

With that in mind, Zoey’s parents knew they needed to find resolve somehow and arm themselves with information, and most importantly support, from others who understood what they were going through.


Zoey’s pediatrician Dr. Nancy Mallon in Verona, NJ directed Laura and her husband to the Progeria Research Foundation. This is where they also met and connected with Dr. Leslie Gordon and Dr. Scott Berns, Sam Bern’s parents, who started and run the organization. It was here that they started to network and meet other families going through their very experience.


For Laura's dad, John Marozzi a business man who runs his own company, he felt helpless on the sidelines watching his daughter going through this pain and struggle. With little promise in current medical advancements, John knew that money needed to be raised to put towards his granddaughter's care and treatments. With support from The Progeria Research Foundation, and countless others, he helped bring to life a group called Team Zoey.

Now, four years later, after the alarming diagnosis and fear of the unknown for their child, Laura and her husband now have an established network of supporters both friends and family, and funds being raised to help Zoey and other children with progeria.
Zoey is a very happy, smart and boisterous child who loves to sing and play. Despite progeria, she is a funny girl who is full of life. While she does have some physical limitations she always finds her own way


of getting around. She goes to pre-school, which she loves, and balances her schedule with necessary medical appointments yet always finds time for favorite activities including arts and crafts, dancing and more.
Everyone who meets Zoey, falls in love with her.  She is a free spirit.  While she does get tired frequently, she rarely wants to sleep and is a high-energy spirit whose enthusiasm is infectious.

Zoey’s parents were anxious to get her into a clinical trial, as they could not sit by and do so little medically while the disease took hold of their child’s life.


In July 2013, their prayers were answered and Zoey began taking three drugs as part of a clinical trial called Triple Trial Expansion.

In addition, Team Zoey became the New Jersey Chapter for the Progeria Research Foundation. They often hold events to raise funds to pay for Zoey's medical expenses and for other new children entering the trial.

Next week, Team Zoey is hosting a Spin for Life event on February 9. People can sign up for 30-minute time slots or spin for longer, fundraise and/or donate. To learn more about the event or take part by way of donation, please visit here.

Every little bit counts in the fight against progeria. Mommy's Point of View has already signed up with a donation. Please join us in the quest for necessary research for this disease.

Disclosure:  The company I work for, Green Room Communications, does pro bono public and media relations work to support Team Zoey and this important cause, progeria. Please know, I have not been paid to write this blog post, but want to disclose that we are in connection with the organization to support and raise much-needed awareness.