Last month Sarah and I went to the arts and crafts store Lakeshore and did an art project as part of their free weekend workshops.

These free activities are a great way to expose kids to different mediums and ideas, and are a good excuse to do a fun activity that doesn't cost money. It is also a great way to find inspiration too for arts and crafts activities to do at home.

The experience is like an in-person version of Pinterest where you get to see the ideas up front and close but then you get to take action and develop yourself with complimentary supplies.

The art project that day was a dragon in which tissue paper squares were glued to the outside of a paper cups along with streamers through the bottom of the cup.

I had never worked with this material to do art projects in the past, so I was intrigued to see what we could develop.

What I liked most about the tissue paper was that it was really easy to handle and use.  The opportunity for creativity was really endless.  Its was a project I could feel comfortable having my preschooler do at the kitchen table with minimal supervision. 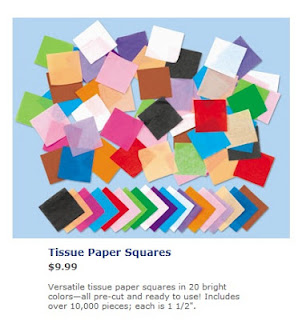 Therefore, since I liked using the tissue paper, and Sarah seemed to have a good time with it too, and seeing the impressive ability to transform something so simply and easily, I decided to purchase a pack that included (if you can believe it), 10,000 tissue paper squares, for $9.99. You can buy a smaller size (3,000 pieces) for just $3.99 on Amazon.

Fast forward...a few weeks later Sarah and I were hanging around the house during a weekend day  chilling out and doing some art projects.  She was taking a break and I had an idea.

I found an old canvas that I painted, ironically with a cherry blossom tree and painted over it when I realized I didn't love it as much as I had when I developed it. However, I held on to it thinking I might be able to breathe new life into it later on.

I had already painted over the initial painting a while back and the surface just could not get smooth. I then chose to spray paint it too but to no avail I could not d something I was happy with. So, it went into storage. It was then that I remembered that I had it and I figured, what do I have to lose by trying something else.

So, with the tissue paper I began to glue one square at a time.  At first I had no idea what I was going to create and then a vision of a cherry blossom popped into my head and I kept going.  All the while I was thinking, if it didn't come out well I could just get rid of it.

About an hour later I developed the cherry blossom tree above. Because I was having fun Sarah wanted to get involved too. She started to hand me the individual squares one by one until we were done.

Sarah has since insisted that this new creative piece live in her bedroom. It now hangs on her very bright pink wall, and it's the first thing she see when she wakes up in the morning.

The feeling I have when I see this new cherry blossom it is something like making lemonade from lemons. I had no idea what would transpire that day when I decided to create from nothing. Inspiration crept in, and sharing in the process with Sarah was a beautiful experience.

It's great to try new things. And, showing our children that we can create with our imagination and see what comes about its a beautiful concept, and not focusing necessarily on the end result of perfection.

As Dale Carnegie used to say in his ever popular, and personal favorite book, How to Win Friends and Influence People, "practice makes permanent"...not perfect.