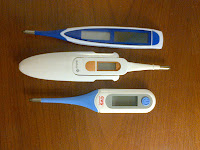 All I can say right now is, REALLY?

Can it be possible that for nearly a week maybe Sarah hasn't been sick with a fever?

Last night I was on the phone with my mom, who has also been worried as well about Sarah, and she said to me, "is it possible that the thermometer is not working?"

In that moment I thought, is this even possible?

Then, I thought back to the days at the beginning of this insanity when Sarah coughed during the day and mostly at night for a few days. It was so bad that her daily allergy therapy wasn't helping at all. We tried a recommendation from the doctor since cough medicine is not recommended for children under the age of six.  We tried a natural liquid supplement called Zarbees, and it worked like a charm. The coughing stopped.  Some liquid honey and zinc did the trick. But, the fevers continued.

She was sick.  This was not her allergies.

I also remembered that I was somewhat out of it as well for a few days this week.  Adding to my allergy regimen helped initially but then my symptoms changed and nothing else I took helped.

I was sick.  Lightheaded and achy yet no fever.  This was not my allergies.

Flash forward, to our thermometer conundrum...our Safety 1st thermometer, our second after the battery went on the first, has been very reliable.  The reviews were excellent on the product and we relied on those numbers to treat Sarah over the years.  It's quick, and easy to use.

So, why should I think that if the battery is working okay to think that there should be anything wrong with it?

Sarah is one of the few preschoolers still willing to get her temperature rectally.  If you can believe this, since we were been house bound for over two weeks Sarah would often drop her drawers every hour or so just to get her temperature taking in the hopes that it would be down, and she could go back to school, have play dates again, and going to birthday and graduation parties.

After seeing three pediatricians this past week it was decided that blood and urine tests needed to be taken.  When all but one of those results came back negative or normal, we were all stumped.  We are awaiting the Lyme Disease test results still.

A fourth pediatrician from the same practice then suggested that after the Memorial Day holiday should Sarah's fevers not dissipate, that we should pursue autoimmune testing.  I held my breath and said "okay" and left it at that again wishing and willing Sarah's temperature to go back to normal.

Sharing this news with friends and family, a friend of ours who is also a chiropractor, asked if he could see and treat Sarah to see if there was anything at all that he could do. He thought that maybe she might have inflammation causing the fever and maybe an adjustment would help. I was extremely skeptical about this approach but after sharing my concerns around this method of care Daniel and I discussed it and agreed that his approach, which did not involve cracking necks and pressing on muscles, was worth a shot. 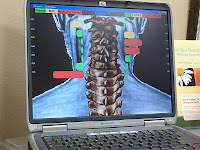 At the start of the session Sarah's temperature was taken, through an approach I had never seen before, in which thermal images are taken. Sarah's reading, to the right, of her neck and upper spinal column included some green coloring (cool) spots and several intense red (hot) spots that are considered moderate to severe.  As a result, she experienced her first-ever adjustment with a cool tapping machine that didn't bother her at all.  She was very good about it, which brought me relief. Something was up indeed. The red spots meant that something was off.

After coming home we wanted to gauge Sarah's temperature. To our chagrin, the thermometer displayed 101.

As you an imagine Daniel and I threw our hands up in the air and said, "What is going on?"

So, you can imagine that when my mom mentioned the possibility of the thermometer not working accurately I felt like an idiot.

How could I have not thought that the thermometer was wrong, or faulty?  Why?  Because it is still working?  There was no reason to believe that it was inaccurate.

I sent Daniel out to get another thermometer.  We were getting to the bottom of this, no pun intended here, as I was not letting this get past me now. We gave it a try, and no surprise, it was a full degree under where the Safety 1st thermometer was.  Still, it was telling us that Sarah had 99.5, which is not her normal body temperature. This means something is still brewing.

I then decided to get yet another thermometer as I was skeptical about the CVS brand. Sorry to say, but true. I picked up another digital thermometer that was solar operated called the SolarTherm Speed Thermometer, which was also highly recommended by a leading women's magazine.

Both the CVS brand and the SolarTherm were a degree, at least, lower than the Safety 1st. They were not identical but closer in readings.

I wanted to rip my hair out of my head.

How, as a parent am I to rely on a product and find that I can't seem to trust any of them to do the job I need it to do?

As a result, today I decided to call a family member who is an infectious disease specialist and shared with him the saga we have been experiencing. And, knowing him, had he had any major concerns he would have been at our house right away or coordinated an appointment with a fellow infectious disease expert at the Children's Hospital of Philadelphia (CHOP).  Instead he said that it's likely that after two weeks Sarah is fine.  Because Sarah's demeanor was that of a healthy, active, and rambunctious child he was skeptical to think that there was anything serious going on. He didn't feel that it was necessary to take Sarah through more testing that could also be painful when it's possible that the virus she had has likely run its course.

At that moment I didn't necessarily feel clarity but I felt relief coupled with frustration.  While we are now going with the new thermometer's readings, which still show Sarah as 99ish, we are still stumped when the Safety 1st showed Sarah at 100.5 tonight.

At this point,  we are done with this so called fever and moving on to make the most of the rest of this weekend.  You can bet it included a jaunt to our local ice cream shoppe for a special treat.

Parenting is such a hard job. And, not being a medical expert makes it even more challenging. Because Daniel and I work from home we had the luxury of being extra cautious keeping Sarah out of school to prevent her from getting others sick and to get her on the mend with lots of rest and fluids.

I am throwing my hands up in the air with this situation.  What an incredibly frustrating situation.  I don't even know what to say. I still feel like an idiot.

What thermometers do you use and stand firm behind (not an intentional pun)?