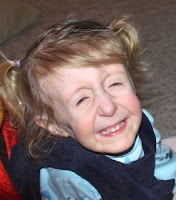 A few years ago I learned of a disorder that I had never heard of called Marfan syndrome.

A new colleague, at a job I was interviewing for at the time, mentioned to me that her daughter was sick with this disease. When I started the job a year later her daughter had since passed away due to complications of the disorder.


I can’t begin to imagine what life would be life managing a child with a life-threatening condition that makes living challenging.


Little Angelina was an angel.  She had a megawatt smile, as you can see here, and she impacted everyone who she came in contact with. I was told that you couldn’t help but fall in love with her and that she lived each and every day to the fullest.


I was not fortunate to meet Angelina in person but through others stories and pictures of this sweet little girl I can see why it’s hard not to feel sadness for this bright star that has since gone out.

Today is the day that Angelina passed away nearly three years ago.  She would have been five years old, the same age as my daughter.


In her memory, I asked her mom if I could share more about Angelina and use this time of sadness for her loved ones to educate others on Marfan syndrome.  She said, “That would be such a nice thing to do.”

According to the National Marfan Foundation website, Marfan syndrome is a disorder of the connective tissue, which holds all parts of the body together and helps control how the body grows. Features associated with the disease are often found in the heart, blood vessels, bones, joints, and eyes and sometimes the lungs and skin.  Intelligence is not impacted by the disease.

The disease itself is caused by a “defect (mutation) in the gene that tells the body how to make fibrillin-1 -- a protein that is an important part of connective tissue…[resulting] in an increase in a protein called transforming growth factor beta, or TGFβ…,which causes problems in tissue throughout the body.”

Marfan can be hereditary in 3 out of 4 people where a person gets a mutation from a parent who already has the disorder. Other people have what is called “spontaneous mutation,” which means that they are the first to have the disease with no explanation of why. This is what happened with Angelina. Her disease was a mystery to all who knew her.

People with Marfan syndrome can also pass the mutation on to children with a fifty percent chance.


This disease is so small in that little Angelina was 1 in 5,000 people suffering from Marfan. It also does not discriminate and can impact men, women, children of all races and ethnic groups.

This disease does have varying degrees from mild to severe.  Not all people with Marfan’s will experience the same fate as Angelina.  Her condition was more severe. Interestingly, most people with the disorder are able to lead productive and satisfying lives, especially thanks to major medical advancements along with lifestyle changes such as limitations in physical activity.

Like many diseases, Marfan’s is not one size fits all.  Arming ourselves with as much information as possible is important along with teaming up with numerous medical experts to confirm an accurate diagnosis and next steps.


Angelina was a unique child, and her disease was no different.

In Angelina’s memory, and others who have lost their battle to Marfan’s, and those living with the disorder in need of ongoing research and support, Mommy’s Point of View is making a donation to the National Marfan Foundation here. If you would like to join in the fight against this disease I encourage it. All that we can do to help raise attention, awareness and funds for much-needed research for this important disease is a step in the right direction for Marfan.

The National Marfan Foundation is also taking action on June 11-12, 2013 for an advocacy day to engage with policy leaders to encourage more funding to support research for the disease. They are coming together to make a difference and fight for victory over Marfan's. If you or someone you know has a personal experience with the disease and wants to share their story please encourage them to do so and if they want to join in the fight they can.

While Marfan may not impact the same magnitude of people suffering from more known diseases, Marfan’s has a face too, and a great need for research and support.
at May 20, 2013