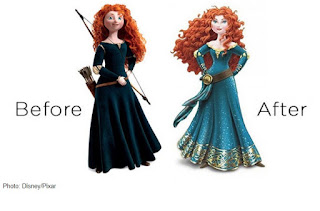 I was saddened to read today that Disney is looking to revise the image of Princess Merida from the Pixar animated film "Brave" to appear somewhat more voluptuous with more defined breasts, hips and curves. She doesn't look like a young girl anymore but instead a mature woman.

There was nothing wrong with Merida the way she was. I even loved that she was no nonsense and not shaped like an unrealistic version of what society deems as beautiful.

Apparently, the change was recently unveiled to "coordinate with Merida's official crowning as Disney's 11th-ever princess" at Walt Disney World, according to Movie Talk on Yahoo.com.

It is a shame to turn a fun-loving, feisty character who has a lot of spunk and confidence into a person that is years beyond her age and with a more mature look and unnecessary sexuality.


"This one character may not do any damage to a girl's psychological development, per se," child development expert Dr. Robyn Silverman tells me. "But Merida joins a barrage of thin, sultry characters for girls, making her yet another facet of our sexed-up, thinned down messaging."

According to an official statement from Disney, “Merida exemplifies what it means to be a Disney Princess through being brave, passionate, and confident and she remains the same strong and determined Merida from the movie whose inner qualities have inspired moms and daughters around the world.”

Merida is all these descriptions, then why does she need to physically makeover?

What we love most about Merida is that she is a fun-loving, endearing, funny and an engaging character who is ever more real than other Disney princesses, and she is relatable.  It's not all about relationships, finding love and looking a certain way.

I have no problem with princesses as my daughter loves them. However, when she starts to ask questions about why the new image of Merida looks different than what she is used to, how as a parent am I to explain without causing concerns inside her young, impressionable mind without her seeing her self only through physical attributes being considered more important?

As a parent, I focus heavily on the personalities, skills, mannerisms and interests when it comes to the princesses.  For example, we love Belle because she likes to read books and help others,  we like Cinderella because she is kind-hearted and cares for animals and we like Tiana because she is hard-working and dedicated to fulfilling her dreams.

To take action against this ridiculous change in Merida's image a blogger for a site named "A Mighty Girl" has started up a petition called "Keep Merida Brave." I have taken action and signed the petition to prevent this unnecessary makeover.  Please join me in this quest to keep beauty in the eye of the beholder and to take action and sign.

It's hard enough that our magazines are filled with models and celebrities in bikinis focusing less on their good deeds and endearing accomplishments but instead on physical attributes.  I want to make a shout out to companies like Dove who are taking women seriously and focusing on the woman inside and out.

Women are smart, funny, caring, loveable, compassionate and beautiful regardless of their dress size and you can bet that I will continue to be cognizant of this as I raise my daughter to become a strong and confident women proud of herself and her accomplishments and living out her dreams without focusing on her weight and body type.  What I will continue to do is instill in her health eating habits and a strong sense of self, as best as I am able to do.
at May 14, 2013