Don't Give In to Tantrums, Stand Your Ground

How many times have the kids not listened well, lingered to clean up their rooms, or just done something that we specifically told them not to do that they chose to do anyway?
I bet a number of us, myself included, are raising our hands now.
In these instances we try to enforce rules where our kids cannot get the things they want when they don't listen or don't what they are asked.
Well, this happened this past weekend with Sarah, and Daniel and I knew that we had to stand firm and not cave even if it meant not doing what he and I wanted to do.
It was hard indeed to stick to our guns but am so very glad that we did.
After several attempts at trying to get Sarah to clean up her room and the family room where many of her toys and belongings were strewn, Sarah whimpered on for what felt like an eternity, and did not do what she was asked to do, even when help was offered. I even sat down in her room and put away her clean laundry to show her that I was helping, and sticking around with her.
We also mentioned to her several times that if she did not cooperate she would lose the opportunity to watch television that morning. I even tried, thinking I could reverse the psychology, and say that she could watch television once she cleaned up her room.
As you can expect, Sarah did not cooperate. She whimpered, cried, and moped some more. Therefore, I left the room and stood my ground and confirmed with Sarah that the reward of television was now gone.
That day we were also planning to go to the children's museum, a place that Sarah thoroughly enjoys. I was actually looking forward to going too since we hadn't been there in a while.
Let's just say that the more Sarah acted out and the more she refused to listen the more I knew that that privilege to go the children's museum had to be taken off the table too.
As a result, there was no television watching or museum visit that morning or afternoon. Therefore, Daniel and I agreed that he would go out and run his errands, and I would do the same when he returned, with Sarah remaining home and indoors.
As I was leaving, it seemed as if Sarah was ready to throw in the towel. Daniel then came up with a brilliant idea and asked Sarah if she would like to listen to music to help her clean up.
Let's just say that when I returned home not only was her room cleaned, bed made, and family room tidied up, Sarah approached me at the door on her own cognizance, saying that she was sorry for not listening and that she understood why she couldn't watch television or go to the museum.
I then mentioned to Sarah that if her renewed, pleasant, cooperative behavior continued through the afternoon and evening and following morning, I would take her to the museum the next day.
We had a great time at the museum the following day.
As hard as it is to want to cave when our kids don't listen, it is important to stand firm so that our little one's don't take advantage of us, and know that they will lose what is of interest to them if they don't cooperate and listen.
Something else that is important to know, is that we shouldn't threaten to take away something that we know we can't stick to. If you are going to friends or family and really want to go we shouldn't say we won't go. Or, if you are going on vacation the next day, instead of saying then we won't go on vacation, instead say that you can't go on the rides on the first day or you will have quiet time the first hour we get there.
What are some of your suggestions for managing tantrums? We would love to hear your thoughts and successes so we can all learn additional strategy.
at July 17, 2012 No comments: 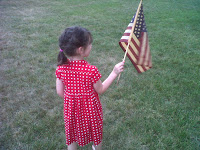 As we get ready for our Fourth of July celebrations across America it's important to take a moment to recognize and be thankful for the freedom and independence that we have, and the sacrifices made in generations past to help give it to us and to keep us strong.

In honor of today, here are some special Haiku to commemorate, and a special drawing by Sarah and a photo too. 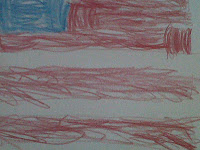 White stars and red stripes
A toast to our freedom
Patriotism