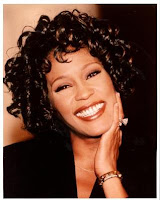 I was saddened to hear about the death of Whitney Houston, an iconic singer of my youth and young adulthood who was known for her incredibly high octave notes and soulful voice, which resonated for millions.

Often times, Whitney was established as the benchmark for talent. Maybe that was too much for her to handle through her life. Some people struggle in life with too much success, and especially too much fame and fortune. It's so very unfortunate.

I really thought there was hope for her after she has a rough go of things in her marriage with Bobby Brown. Once her daughter came along I thought maybe there was renewed hope and inspiration for her.

I feel pain for her now 19-year-old daughter who will experience her future life without her mother's emotional and physical support. I pray for her daughter to have the strength, and much needed support, to help her remain level-headed, on track and with direction. I pray for her not to get "lost" like her mother did by the emotional and physical demons in her life.

This somber blog post is in memory of Whitney, and in honor of her daughter Bobbi Kristina, her survivor, who now lives beyond her mother's legacy.

I think back in time to the many songs sung by Whitney Houston that I played over and over again, tapping my foot to and making a pathetic attempt at singing on top of my lungs. Songs like "I Wanna Dance with Somebody" and "Greatest Love of All" and "I'm Every Woman" all had meaning and purpose. When Whitney sang, she gave every melody and harmony purpose.

A particularly special song called "Count on Me" sung by Whitney Houston and CeCe Winans that resonates much for me, and is a special connection to a dear friend, troubles me as well, as far as Whitney goes. This song is about counting on someone to be there "through thick and thin" and "when you are weak I will be strong" and "call on me I will be there." It seems as if Whitney may not have had enough of that in her life to help her when she needed it most. It could also be that she didn't know she needed help or that she struggled just too much to get her life back on track and in a positive direction that it became an uphill battle.

Whitney suffered in her final years of life, and especially in the days leading up to her death. Her passing leaves a hole in many people's hearts, including mine. There won't be a moment when listening to her music that I hear her call for help, acceptance, peace, love and support.

In memory of Whitney Houston here are some Haiku.

A voice filled with song
Magic, energy and zest
Her music lives on

For Whitney Houston
Your music is part of us
Always, forever