Sarah and The Green Balloon 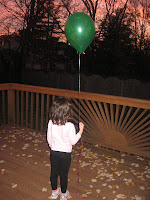 Recently, I was thinking about an experience Sarah and I had this past summer. "Why?" you ask I write about this now, you will see and understand as you read below.

One calm and sunny summer afternoon Sarah was invited to join a friend's party. At the conclusion of the party she was offered to take home a few colorful balloons. I really only wanted her to take one as she didn't need three. But, it was a battle not worth fighting as it seemed innocent enough.

Nothing about these balloons seemed special in any way at the time.

I would be reminded later on, and over and over, the significance and importance of one of these particular balloons.

I then tied the balloons to the stroller and together Sarah and I walked hand-in-hand home.

As the weather was still very warm and the sun not yet set we agreed to make a pit stop by the local playground to meet up with other friends and play some more.

So, imagine this, playground, kids and balloons. It's no surprise that as soon as we arrived we were surrounded by a number of kids interested in the balloons. I was able to stave off a few kids at the beginning eyeing the balloons wishing to play with them. Shortly thereafter the children made their way back to the slides and playground toys. Even Sarah was in her own world enjoying her freedom roaming and playing and being with friends. She didn't seem to care about the balloons at all.

Or, at least so I thought.

It was only then, while Sarah was playing, that a little boy, a year younger than she, who I knew, and whose mom I was friendly with, approached me. He was crying. He really wanted a balloon. Thinking that there were still two remaining balloons, colors of which I do not remember, it seemed harmless and generous to share just one balloon.

She likely wouldn't remember that there was even a third balloon, let alone it being green.

And, we all know that this is where I made my mistake. I should have asked Sarah if I could share her balloon with our friend instead of giving it away or at least let her be part of the process in sharing it. It's likely she would have said no and would have made a scene. I mean, come on. Do I really need to do this every time? The balloons weren't even really hers in the first place.

Boy was I wrong.

At the moment I started to pull off the balloon from the stroller, the green one, and share it with the little boy, Sarah turned her head, saw me hand him the balloon, watched him hold it and saw him let it fly into the sky.

She then let lose.

Sarah produced a sound louder than any I had heard in a while. She wailed. She screamed. She howled. She cried for that green balloon.

It took quite a while to console her. I was filled with guilt. I was frustrated because she had two remaining balloons. I was annoyed because this was becoming an embarrassing situation. I was a lot of things in that moment. I was also very sorry for taking something that was hers and giving it to someone else without her permission.

I tried my hardest to explain that we were sharing. She wouldn't hear of it. It was kind of hard to have a conversation like this with her when she was emotional and upset. What could I have expected? She was only two and a half.

I then tried to explain to Sarah that the green balloon was now in the sky with her grandpas and grandmas. She still wouldn't hear of it. Mind you, I have never had a conversation with Sarah about death or heaven or anything of the sort. She likely thought I was making something up to make her feel better. She was mad. She was upset. She was not listening. Nothing I could say could comfort her at this moment.

We headed home right away.

I tried much in that time to explain to her that she had grandparents who were no longer with us, up in the sky, and some of which she had been named after.

Every day for quite some time after that incident when Sarah and I would walk through that playground she looked up and would say "green balloon."

One day, out of the blue, Sarah stopped me in my tracks with something she said. Not sure if Sarah saw another green balloon, was triggered by something she experienced at that moment, or was indeed listening that day the green balloon flew away into the sky above that she remembered what I said. She told me that the green balloon was in the sky with her grandparents, who she then named specifically.

Both my husband and I lost our fathers years ago, well before Sarah was born. And, Daniel lost his mom suddenly as well. Trying to explain to a little kid about past relatives, people she was named after, loved ones no longer living I suspected would be too tough a concept for a kid her age to grasp.

I am not even so sure if Sarah really understands that some of her loved ones are gone as she never met them.

However, it was because of this green balloon, which meant nothing at the time, now means such a great deal to me, and to her.

It's when Sarah acknowledges the green balloon that I smile and think back on fond memories of my dad and other loved ones in the sky.

It's ironic how something so simple has been brought to life in more ways than one. And, that is why the green balloon needed to be shared and lifted into the sky. It is now where it belongs, in our hearts forever.