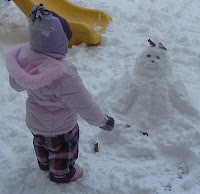 With the season's first snowfall, just before winter began, Sarah was able to build her first snowman, really a snowgirl, this weekend. It was so much fun, for her and for me, and Daddy too. With the snow being somewhat softer and less able to pack tight we were able to make a mini snowgirl.
I have been wanting for so long to get snow so that I could get Sarah all bundled up for the winter fun, and be a kid with her.
And, the snow came. Yeah! And, bundled up Sarah got. From head to toe she wore her heavy winter jacket, snow pants, boots, hat, gloves and scarf. I kept joking that there was a kid in all those layers and still her cuteness shined through. She was walking a little stiff at first trying to get used to all the layers. After a while it became a second skin for her.
Knowing what to expect outside with Sarah, and how she typically is, I was sure to bundle up myself. It's nice to know that my ski and winter cycling clothing were able to get some good use. All of us bundled up, we were ready for our snowy adventure.
To the playground we went. There were piles of snow everywhere and not many paths for walking. We dived right in. At first Sarah was not sure what to make of the snow but after a little while she started to really like it. We thought she wasn't happy a few times when either her gloves came off for the hundred time and her hands got cold, but she was a trooper. We offered her many times to go back inside and she wanted to continue on.
We moved on to another playground to find that a snowman had already been built by other neighborhood kids. So, Sarah and I created him a friend. Her name was Snowy.
Having a child certainly enables your inner child to come out. Since having Sarah it's been such a great time being a kid with her and celebrating life through her eyes.
Get into to the snow and have a ball before it melts.
at December 21, 2009