This weekend was Monkey's (I mean Sarah's) first ever visit to the Zoo. I went with the hope that it would be a fun experience for her but also the realization that there was a chance she may not like it or not want to be bothered with it since she was still only 18 months of age and possibly not yet at the age to fully appreciate.
As we neared the Zoo, to also meet up with Grandpa Tom who was a volunteer, Sarah became sleepy in her stroller from the train and walk commute. So, already our Zoo experience was starting off in a different direction then as planned even though I worked hard to coordinate arrival so as not to impact nap and lunch time.
Fortunately, Sarah was able to stay awake long enough to see a snow leopard, penguins, polar bears and, especially, monkeys, which she didn't really care for but I was so excited to see. In fact, I felt more like the kid at the zoo than she. 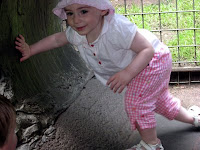 Further, by the time we made it to the children's zoo, Sarah was passed out. As we walked through the exhibit I kept saying how much Sarah would enjoy this crawling into turtle shells, through logs, petting the sheep and goats, etc.
When Sarah did wake up, from a shorter than usual nap, she did get to experience a sea lion show taking place directly in front of her. She seemed interested at first but then became more aware of the massive crowd around her watching the show as well. When the show was complete, Sarah seemed more thrilled to walk and run around the perimeter of the sea lion tank.
We did eventually go back to the children's section where Sarah did proceed to crawl through and climb just about everything she could get into or on to. Just glad she didn't fall in to the water as another child unfortunately did. Knowing Sarah she might have tried jumping in but we managed to steer clear as best as possible.
All in all, the Zoo was a fun experience. While it was not the best reaction I hoped Sarah would have seeing new animals up close and personal it could have been a lot worse with screaming, crying and being out of control.
We look forward to many more zoo experiences in the future and hope that each time gets better and better, we hope. If anything I have learned as a mom, especially at this early stage, try not to have too high expectations and hope for the best. Make the most of moments and build from there and all will be happy.